When Khizr Khan held up the United States Constitution at the Democratic National Convention, challenging then candidate Donald Trump and asking if he has ever read the Constitution, the entire stadium stood up with a loud roar and overwhelming applause.  Khan paused when hearing the encouragement, and only started speaking again after what seemed like almost a minute of unrelenting cheers.  For days and weeks after the DNC, that clip played over and over on news programs. It was then -- the moment when Khan held up the pocket sized Constitution -- that the conversation shifted. The US Constitution was once again the basis for which the President was held accountable.  Within 72 hours, sales of the Constitution had spiked to 45,000  -- the amount that is typically sold over an entire week, according to CNN Money. Fast forward almost a year later: Donald Trump is President.

Since then, media programs including The American Law Journal have asked experts and lawyers: is Donald Trump breaking the Rule of Law?

From our program: Trump, the Constitution and the Rule of Law

With the increase of Constitution sales, came an increase in the Google search, “How to impeach a president” and “The 25th Amendment.”

A number of videos that come up in the search explain the impeachment process were created and published online shortly after Trump’s inauguration.  One website, ImpeachDonaldTrumpNow.org, names Trump in direct violation of the Constitution grounds for impeachment:

“From the moment he assumed the office, President Donald Trump has been in direct violation of the US Constitution. The President is not above the law.  We will not allow President Trump to profit from the presidency at the expense of our democracy. Congress’s impeachment investigation should include the President’s violations of the Foreign and Domestic Emoluments Clauses and whether the President has — in violation of his constitutional duty to take care that the laws be faithfully executed — prevented, obstructed or impeded the administration of justice.We are calling upon Congress to pass a resolution calling for the House Committee on the Judiciary to investigate whether sufficient grounds exist for the impeachment of Donald John Trump, President of the United States.”

Interestingly enough, back in 2014, Donald Trump asked a very similar question about then President Barack Obama. “Are you allowed to impeach a president for gross incompetence?” Trump tweeted.  Hopefully, Trump has read, or reread, the Constitution by now.  He would get his answer there.  Stated in Article II Section 4:

“The President, Vice President and all civil Officers of the United States, shall be removed from Office on Impeachment for, and Conviction of, Treason, Bribery, or other high Crimes and Misdemeanors.”

This means, if Trump is convicted of treason, bribery, or other high crimes and misdemeanors, it is grounds for impeachment.  If that happens, the majority of the House of Representatives must vote and pass on one or more articles of impeachment.  The president will be impeached, but not removed from office. According to Josh Lowe, reporter for Newsweek in "How the Process Works":

“After the House has impeached the president, the chief justice of the Supreme Court will preside over a trial in the Senate, during which a team from the House functions as the prosecution and the president has defense lawyers.  If at least two-thirds of senators find the president guilty, he or she is forced out of office, and the vice president takes over.”

Some experts and commentators have claimed that the phrase “other high crimes or misdemeanors” is broad and vague.  After former FBI Director James Comey testified to Congress various reporters and officials quickly suggested that the dealings of the Michael Flynn investigation by the Trump administration are obstructing justice, including this in the New York Times: What Is Obstruction of Justice? An Often Murky Crime, Explained. 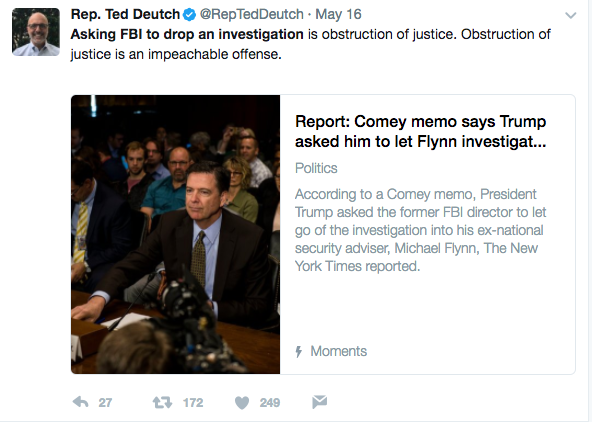 Former federal prosecutor Julie O’Sullivan told The New York Times that “the power relationship between a president and the F.B.I. director could elevate a request to shut down a case into an act that amounts to impeding an official investigation. ‘He really needs a lawyer,’ Ms. O’Sullivan said of Mr. Trump. ‘He is building a beautiful case against himself.’”

In an article titled “What You Should Know about Obstruction of Justice,” the Ohio State Bar explains what constitutes obstruction of justice:

Obstruction may consist of any attempt to hinder the discovery, apprehension, conviction or punishment of anyone who has committed a crime. The acts by which justice is obstructed may include bribery, murder, intimidation, and the use of physical force against witnesses, law enforcement officers or court officials. The purpose may be to influence, delay or prevent the communication of information to law enforcement officers; to influence, delay or prevent court testimony; to alter or destroy evidence; or to evade a subpoena or similar court process.

In U.S. Code, there is a law that deals with obstruction of justice. The section “Influencing or injuring officer or juror generally” is governed by Title 18. It states:

Some lawyers have argued that the concept, “Obstruction of Justice” is vague under U.S. law.  There have only been two American presidents who were involved in impeachment proceedings in the last century—Bill Clinton in 1998 and Richard Nixon in 1974— both of whom were accused of obstruction of justice.

The big problem at this stage is that in the absence of tapes, it will be the word of the President against his disgruntled former FBI director. And even if Comey's words are accepted as true, it still may not add up to a legal case of ‘Obstruction of Justice.’ Trump lawyers and advocates will urge the public to ask: Why didn't Comey complain to Congress or the Department of Justice if he felt the President had urged the commission of a criminal act? Why didn't Comey resign and blow the whistle on the President? [...] The evidence supporting impeachment must be powerful and compelling to attract the votes of the President's own party. Many in the party may not like Trump, but they will never impeach on evidence this thin and flimsy.

While there are those in Congress who want to get rid of Trump, there are still his supporters, both in high ranking positions and the American people who casted their vote in support of him. Callan continues:

Trump supporters will say Comey is really seeking revenge in anger over the loss of his prestigious job. They will rally, asserting that this is yet another conspiracy by the coastal media elites against their fearless leader who is merely trying to ‘drain the swamp,’ as he promised.

If there is one thing all parties understand about impeaching a president: the evidence against the leader of the free world must be solid and overwhelmingly compelling before impeachment proceedings garner two-thirds of the votes in both the House and the Senate.