All Woman Line-Up At The Philadelphia Bar Association Turns Heads

Almost 150 years ago, for the very first time in the United States, a woman added the title “attorney” to her resume.  Arabella Mansfield was admitted to the Iowa bar in 1869, despite a state law that allowed men only to take the bar exam.  After Mansfield challenged Iowa’s law, the Court ruled that women are allowed to practice law.

Much has changed in a century— with more to come.

In Philadelphia, transformation is happening at this very moment: for the first time in history, three women have been elected to serve consecutively as chancellor at the Philadelphia Bar Association.  Deborah Gross is the current Chancellor, serving until 2018.  Her successor Mary Platt takes office next year, followed by now Vice Chancellor Rochelle Fedullo.  The all-female leadership is unprecedented at the Philadelphia Bar Association and lawyers are noticing.

"It’s an exciting time for women to not only have a seat at the table, but also at the head of the table. Additionally, our last election was also historic,” Gross says “as it marked the first time that all five vacancies on our Board of Governors were filled by women.

“All of our Chancellors were men for nearly two centuries until Deborah Willig became our first woman Chancellor in 1992,” Mary Platt tells The American Law Journal.  “Since then, I have seen more and more women lawyers benefit from the relationships they have developed with other members of our Bar Association and the many leadership opportunities that our Bar Association affords its members."

Platt has extensive experience serving in leadership roles at the Philadelphia Bar Association. An attorney at Fineman, Krekstein, and Harris Law Firm in Philadelphia, Platt focuses on advancing the rights of women of all ages.

"I am thrilled that women lawyers have become leaders in all parts of the Philadelphia Bar Association during the twenty-five years that I have been an active member of the Bar,” Platt states.

The number of women working in the legal profession has steadily increased over the past decade.  But according to the American Bar Association, while 50 percent of law school graduates are women, they make up only 36 percent of the lawyers at U.S. firms. Moreover, women are still in the minority when it comes to appearing in court. 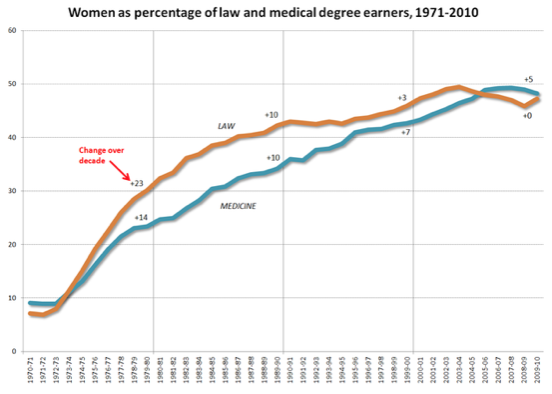 Deborah Weinstein tells The American Law Journal that the time for change is now:

According to a study by the New York State Bar Association's Commercial and Federal Litigation Section, women make up only one in four attorneys in federal and state courtrooms in New York. The stereotypes are some of the hardest to break through.  One woman tells “Above the Law” a common and too often mistake that men make when meeting female lawyers:

Former U.S. District Judge Shira Scheindlin of the Southern District of New York helped to initiate the study and discussed with the New York Law Journal the cause of gender imbalance in law firms.

“Women are not getting the same opportunities to actually talk on their feet, to appear at courtrooms, to take or defend depositions. Something goes wrong once women arrive at law firms, and it's probably because the higher-ranking positions at firms are held by men and people tend to, unconsciously, work with people who look like them. Unless law firms make a conscious effort to bring them in and meet clients, go to court, take depositions, promote them and eventually make them partner, the gap is going to be hard to change.  Women get discouraged and leave the law, leave litigation, or they leave big firms.” - Judge Shira Scheindlin, Southern District of New York

The report recommends that law firm leaders, regardless of gender, should mentor female attorneys, assign partners to work with them, introduce women to people in positions of power, assist them with business development, and be supportive of them in meetings and court.

Susan Smith Blakely, the Founder of LegalPerspectives LLC and author of “Best Friends at the Bar: What Women Need to Know about a Career in the Law” argues that many male lawyers are shocked to hear about gender bias in the legal profession and claim that most are “clueless” about the negative behavior.

“Most of you probably have read at least something about the current lawsuits, but there is more that may come as a surprise.  What you may not know is that the higher you climb in a law firm, the more likely you are to encounter gender bias.” - Susan Smith Blakely, LegalPerspectives LLC

The American Bar Association recognizes the underrepresentation of women in law firm positions.  Women were not admitted to the American Bar Association for almost half a century after it was first formed. “Together, these first generations of women in the law make up an incredibly accomplished group: they include three Supreme Court justices, two U.S. attorneys general, the first women state and federal judges in many regions, the first women deans of Ivy League law schools, and thousands of other successful women, including Samantha Power, Elizabeth Dole, Hillary Clinton, and Michelle Obama.”

To increase the number of women in the judiciary, the ABA urged President Obama in 2012 to consider more women for federal bench appointments.  “We applaud the fact that there are now three women on the US Supreme Court[…] We will continue to encourage female appointments at all levels of our court system,” states former ABA President WM. T. (Bill) Robinson III.

Jasmine van Loggerenberg, a Consultant Solicitor at Workwise Legal LLP, says that female attorneys who are also mothers have more stress in their careers.  “The working environment can become very demanding for lawyers with families who often have to work harder and longer hours when combining both childcare commitments and feeling the added pressure of maintaining the same out of hours expectations that many law firms demand of their employees.  Another hurdle for many working mothers can be changing roles and jobs, particularly in the legal industry. Although some firms agree to flexible working for existing employees it can be much harder for female lawyers to change jobs after they have children as few law firms advertise for part time workers, flexible working hours or job shares. This often means that female lawyers who need flexibility when they start a family don't always have the freedom to move to other roles.”

A survey in The Washington Post shows that women are twice as likely as men to leave law firms for work-life balance reasons.  Author Selena Rezani tells The Washington Post, “You can draft as many pro-employee policies as you like, but unless women are co-creators in the firm’s strategy, they will not shape the culture. Women must hold positions―I’d argue half of them―on the influential, high-ranking committees that make everyday decisions.”

Despite family pressure, female lawyers outpaced men with women working nearly eight hours more per week that is according to Harvard Law School’s Center on the Legal Profession.

The New York State Bar Association report shows that most female attorneys are paid a lowly percentage of lead counsel.  Moreover, a  Payscale study shows legal professionals seeing some of the highest gender wage gaps.  The report also showed that women bill an average of 24 minutes more each day than men do.

Harvard Law School publishes “The Practice,” an academic journal that is backed by research, statistics, and facts.  In a recent edition, ”The Practice” dedicated an entire publication to analyzing the changes and impacts of female lawyers on society trends in the US and worldwide.

“The history of women in the legal profession offers a unique vantage point from which to view the progress of women in society, both in the United States and worldwide. The legal profession is one of the most powerful, well remunerated, and respected in the world. Thus, women’s progress in the law is both a standard bearer and an emblem of progress in many cultures. The law not only plays a foundational role in a democracy, but is often a stepping stone to higher levels of leadership in business and public life." (“Women as Lawyers and Leaders”, Volume I, Issue 4, May 2015).

The Trump administration recently announced it is halting a rule that requires large companies to report what they pay employees by race and gender — an Obama-era policy that aims to close the wage gap.  However, the Philadelphia Bar Association and its lawyers are not letting the news affect their work in the community.

The Philadelphia Bar Association is taking advantage of women’s progress in the legal profession.  This year, the organization is hosting “Branching Out,” an initiative for women interested in making a difference in the three branches of government. The bar association also formed a Committee on Women in the Profession, which works to help advance women in the legal profession in the Philadelphia area.  Specifically, it monitors trends, conducts special programs, and makes recommendations that contribute to achieving its goals.

Vice Chancellor Rochelle Fedullo, a partner at Wilson Elser Moskowitz Edelman & Dicker LLP, recognizes the progress women have made both in the legal profession and at the Philadelphia Bar Association.  ”In 1970, when I was a 17-year-old high school senior, my best friend told me that she would really like to become a lawyer.  I remember responding, ‘Me too, but let’s be realistic.’  Although the ‘list of jobs for smart girls’ was not a tangible document at the college counselor’s office, it was still a very short and realistic list, and it did not include ‘lawyer.’  Six years after graduating college, I started law school at night while I was still working full time as a teacher.  I was amazed that at least a third of my class were women.  Now at the age of 65, I look ahead to the privilege of leading the nation’s oldest metropolitan bar association in 2019 following two women predecessors. I think about how very different my conversation with my best friend would have been if we had it today."