When reflecting on women during revolutionary times, I think of Abagail Adams, wife of John Adams. Her contributions to the rhetoric and role of women in government, albeit indirect, fascinates me.

Her story is easy to find, and Laura Linney's Emmy award-winning performance of her in HBO's miniseries "John Adams" is worth watching more than once. But I'm always curious about the oft-unreported contributions of our many "founding and sustaining" sisters.

On this eve of July 4, I find there's a woman I knew nothing about. Take a look at Petula Dvorak's intriguing Washington Post story (always a great read, follow her @petulad:

This woman's name appears on the Declaration of Independence:

So why don't we know her story?

Look closely, her name is just below John Hancock's:

Congress commissioned Baltimore publisher Mary Katherine Goddard to print and distribute through the colonies copies of the Declaration that was the first most of America saw that included the original signers' names. 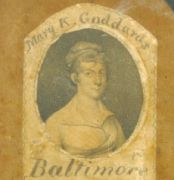 Goddard was considered fearless and fiery. Many times she faced down critics who tried to shutter her presses and bookstore, prevailing after her offices were raided and life threatened.

While running the Baltimore newspaper previously run by her brother, she used "M.K. Goddard." Her reporting included up to the minute news of Revolutionary War battles: Concord, Bunker Hill and others. But it was her editorials that brought acclaim for their impact at pivotal times in the Revolution, but also more than a little criticism. Dangerous threats ensued.

"Until Goddard got the assignment from Congress to print and distribute copies of the Declaration, it was more like an anonymous Internet post than a document of record."

"Days and weeks later, they got a hastily printed, mistake-laden, nearly anonymous document that was the 1776 version of the ALL CAPS EMAIL signed by PATRIOT1776."

The role of women in the Revolutionary War, History of Massachusetts