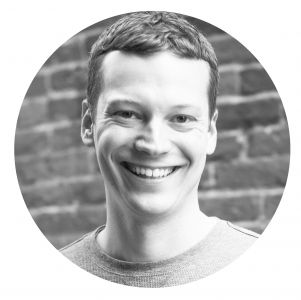 Joel likes television. I mean everybody “likes television,” but Joel REALLY likes TV. It’s the way he relaxes at the end of the day. It’s how he gets a lot of his daily news and information. It’s how he steps into other worlds created by other people, not just for two hours like a movie, but episode after episode, season after season. It’s how he knows "which real housewife did that outrageous thing that made the other one so mad at that place in front of those people."

Joel’s love of television doesn’t end on the couch. He went to “TV Production Camp” every summer as a child (that sentence seems more nerdy in print than expected), returning as an instructor when he was too old to attend as a student. He studied video production at Ithaca College, earning a Bachelor of Science degree in Television/Radio from Ithaca College’s esteemed Roy. H. Park School of Communications. Joel has enjoyed over a decade working in the business, doing any and all jobs possible (starting as a studio camera operator, finding his place as a video editor, learning the roles as a director and producer). Most of his professional life has been spent at MBC Teleproductions in Allentown, PA, where he how serves as production manager. With MBC Teleproductions, Joel has earned many acknowledgements for his work, including PAB Awards, AP Awards, and Emmy Awards (most recently for his work on The American Law Journal).

When he’s not TV-ing (for work or play), you can find him at the beach with his family (you can’t beat a day down the shore), debating Disney princesses with his daughter (Belle is the best, despite what she may tell you), or engaging in a socially awkward interpersonal interaction (after you say goodbye, he will inevitably walk in the same direction as you).

In short, Joel is thrilled to be able to make a living working in television and is proud of the work he has created in his role as studio/on-location director with everyone at The American Law Journal.